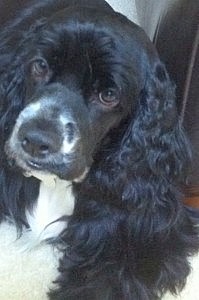 Several weeks ago we were contacted about two cocker spaniels who needed rescuing immediately as their owner had a heart attack and could no longer keep them.  The owner had moved out of the house, convalescing with relatives, and could not take them with him, so the two girls were left in the home.  The person looking after the dogs had to leave town and was going to have to leave them behind.  We went to the house and found the girls filthy and flea-infested since they had not been cared for in awhile.  They were scared and didn’t know what was going on when we loaded them in our car.  Expecting the worse, we were pleasantly surprised that they warmed up to us quickly and let us bathe and groom them.  They were not eating well when we first got them because they were used to table scraps, but they are eating good quality dog food now!  Piper, the black and white girl has found her forever home, but Reese, a beautiful 1 year old chocolate/tan tri girl is still looking.