Marianne is a petite little 4 – 5 year old sable female who was headed toward death row at one of the shelters when a volunteer from an all-breed rescue took pity on her and contacted us.  She was a little growly with the staff because she had a bad ear infection and was in pain, plus she was heartworm positive.  We’ve had her now for about two months and she has completed her heartworm treatment and her ears are in great shape!  She loves her humans and is such a little pistol….her personality has really come out!  Marianne will be ready to go at the end of July and will be at our adoption event in The Woodlands on August 3. 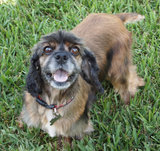