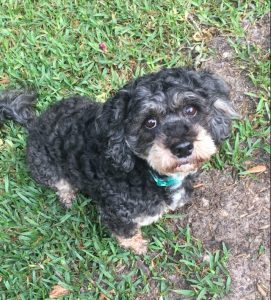 When Nick came in, he was covered in thick mats that covered his entire body…..the groomer said it was one of the worst matted dogs she had ever seen! It didn’t dampen this sweet boy’s spirit….what a sweetheart he is! Nick is a 4 – yr old cockapoo who just wants to be with his human at all times. He’s good with other dogs and cats (and also kids) but is more of a people dog and doesn’t play so much with other dogs. We don’t know what kind of life he had prior to coming to rescue so he might become more playful as time goes by. Nick is house trained and is well mannered.  He loves to sleep with his human, too! Nick is currently looking for his forever home.