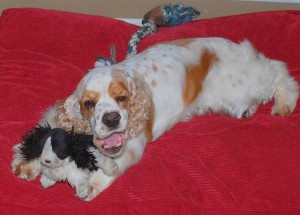 Filthy and flea infested, it was obvious when we rescued Peyton from the shelter that he had been on the streets for quite some time. After his initial clean-up though we expected a bit of “cocker enthusiasm” which just didn’t happen. Peyton had no appetite and appeared lethargic. When he could not/would not urinate, we began to worry. Poor Peyton was diagnosed with a massive urinary tract infection, infected prostate gland and needed catheterization to relieve his pain. After a jump start with intra muscular antibiotic and pain relief injections, he was finally able to relax and urinate on his own. If he had stayed at the shelter much longer, he might not be with us today.

Now, Peyton is a happy dog, carrying around his toys from room to room and finding special hiding places for his “stash.”  He has finished his heartworm treatment and is now looking for his forever home.   This boy is true gem!