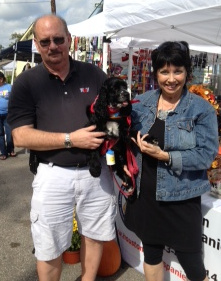 Piper came in with a chocolate/tan girl named Reese.  Their owner had health problems and could no longer take care of them.  Both girls found wonderful homes! 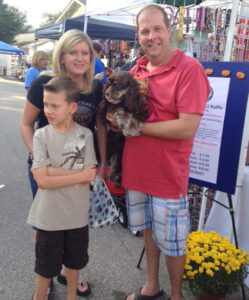 Reese came in with Piper.  Both girls found great homes and both came to visit us at Old Town Spring at ‘PetFest.” 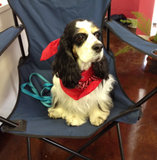 Little Rosie was sent to us by Cavalier Rescue.  Her mom had passed away and she was given up by the family.  We had Rosie for quite some time waiting for that perfect home to come along, and as always, it did!  Rosie is now the queen of the house and doesn’t have to share her humans with anyone! 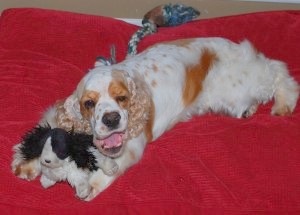 When Peyton’s foster mom chose to be a “foster failure,” we were delighted!!  Peyton was one of the first rescues we pulled from the shelter and was so sick from a horrible UTI that he would have probably died if we had not acted quickly.  After his slow recovery, he then had to go through heartworm treatment, so this boy has been through a lot!  Peyton turned out to be such a sweet, quirky little guy and we all love him! 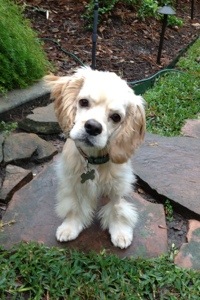 Kirby was tied to a stake outside until a good Samaritan got word to HCSR.  We couldn’t understand how anyone could do that to such a sweet puppy!  Kirby was barely a year old and still had a lot of growing up to do but he’s managed to do just fine in his new home that he shares with his four-legged sister.  They have the best time chasing each other in the yard! 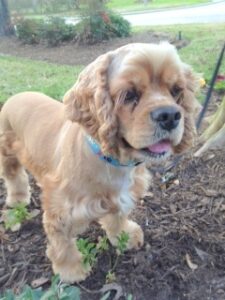 When Sassy came to us from the shelter, she had a horrible bladder infection….little did we know the cause of it was a large bladder stone which we had removed.  She’s feeling much better now and has found her a wonderful family with a big yard and is ruling the roost! 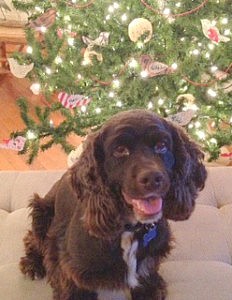 Talley is a beautiful chocolate girl who loves to chase squirrels.  She was hard to keep down while going through heartworm treatment but she finally got through it and found her forever home in the Beaumont area.  Talley is an only child and is spoiled rotten now.  She loves her new back yard and lets the squirrels know who’s boss!

We weren’t really sure what Annie was after we first groomed her.  She sorta looked like a cocker on the shelter page (and was listed as a cocker “mix”), so we took her home, cleaned her up and then reazlied she wasn’t a cocker at all!  She was so darn cute, though, and we found her a wonderful home with her own human to call her own.  She has so much fun riding bikes and hanging out in her new home!.  We’re so glad we saved Annie…..”whatever” she is! 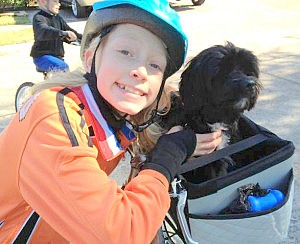 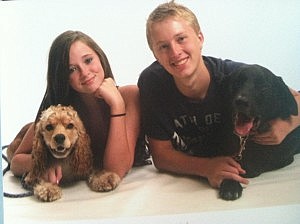 Griffin was one of our first dogs we rescued in our new group.  He was abandoned in a small kennel in a park.  Only a pup, he was very active, dying to spread his wings!  We found the perfect family for Griffin….they had a lab pup who was also very active and it was a match made in heaven!  Griffin and his new family recently moved to Ohio so he’s looking forward to some snowy weather this winter!  This is from his family:    “Griffin has adjusted well to family life with us.   He is a very happy boy who loves playing in the water — every time we turn the bath water on he hops in the shower or tub!  At times this can be frustrating, but we just laugh at him.  He loves all toys, especially balls!  He goes crazy over my daughters volleyball!  Griffin has brought so much joy to our lives and I can’t imagine life without him!  Ernie and Griffin are inseparable….they play all day and now sleep together.  It’s very sweet.” 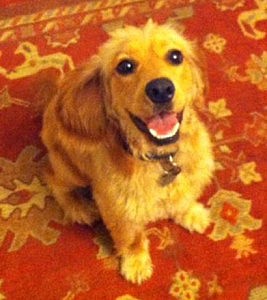 Eli was Houston Cocker Spaniel Rescue’s first rescue dog.  When Montgomery County Animal Shelter contacted us about this baby, we could tell he was mostly cocker but also appeared to have some golden retriever in him as well.  Since he had a docked tail, that was close enough for us!  Eli suffered from demodex mange; therefore, he had to get well before we could place him so we had him over a month before he was adopted.  Eli’s family had another cocker mixed with “maybe golden retriever,” so when they saw Eli’s picture, they knew it was meant to be.  Eli now has his own back yard and chases squirrels with his brother every day!  Here is a picture of Eli when he first came in and one we recently received in October 2012. 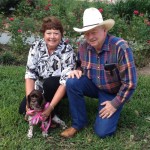 When April’s mom contacted us from Northwest Texas, she thought it would be a long shot to be able to adopt one of our cockers, but she had fallen in love with April’s picture so she called anyway. They drove down to The Woodlands to meet April in person and it was love at first sight! April is a lucky little girl to have a family all her own again after having to be surrendered by her previous family when they moved. We love happy endings! 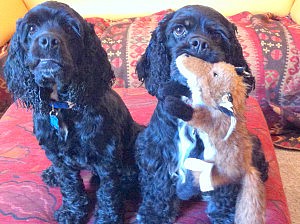 When the couple saw Bear at Pet Expo, the wife could not get him out of her mind. They weren’t really shopping for a dog, but Bear had a real effect on them. After talking about Bear for a solid week after the event, they finally contacted us. Bear was going to be the wife’s dog but now what about the husband? He decided he wanted one all for himself, so they decided to also adopt Clancy (whom they also met at Pet Expo). Now Bear and Clancy (renamed “Romeo” for his loving personality) live happily together and even go to work with mom every day at her business! They also share “Juliet” as you can see in the picture below! 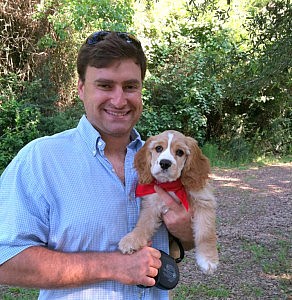 Casey was the feistiest of the five puppies and would bite your toes in a heartbeat.  But his picture won over his new mom and dad so when they met him on Easter Sunday, they knew he was the one!  Casey travels everywhere with his new family, including a recent blackberry picking trip!  He’s stolen everyone’s hearts for sure 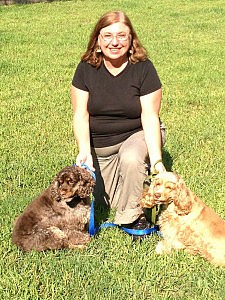 Coco
Coco came to HCSR when her mom moved into an assisted living facility.  Coco’s mom was heartbroken when she had to give her up.  She wanted us to find her a very special home and HCSR delivered!  Coco found her forever home with a former cockerkid, Bethanne, and her family and it was a match made in heaven!    Now Coco gets to go on daily walks with her new sister.  Here is Coco (left) with Bethanne and mom. 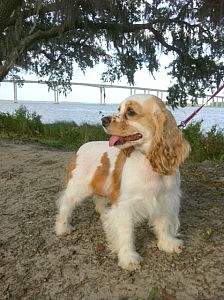 Millie, the mom to our five puppies, found her forever home in Charleston, South Carolina!  The family was in The Woodlands at the recent  Ironman competition and saw our sign that we were holding adoptions at Natural Pawz.  Being cocker people, they just had to come by and see the dogs!  When we were loading up for the day, they came one more time to take a picture of Millie, whom they immediately fell for.  After talking it over, they decided they had to have Millie so they started the adoption process.  Less than a week later, Millie was on her way to Charleston!  They couldn’t be happier and now Millie is getting all the attention instead of living in the shadow of her pups.  The picture below shows Millie taking a walk in one of the many parks she lives close to on Daniel Island.