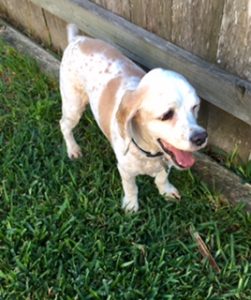 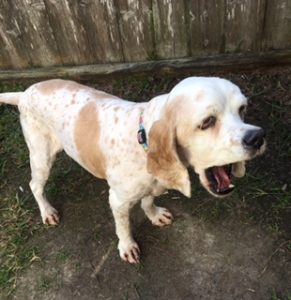 We named him PRINCE, but he looked nothing like one when a rescuer picked him up running the roads on a rainy night and took him to the shelter – something a 9 – 10 year old senior has no business doing. His ears and feet were wadded, nasty, stinky mats from long time neglect, and four baths were not enough to get him clean after we picked him up when we received an urgent plea to which we could not say no. A bag full of mats were cut off him, and he had wires in his mats and was full of fleas. But Prince was so happy being as clean as we could get him, having a good meal, and relaxing in a nice soft bed for the night. Soon, off to the vet he went for his exam and shots where the vet shaved the wads on his ears and feet to make it easier for the groomer, who had to shave his coat. Prince had horrible ear infections and a need for a dental and four extractions, one tooth that was in his sinus cavity. He became a different boy – a real charmer and real prince – a beautiful buff and white and precious cocker spaniel. He is calm, well mannered, house trained, walks great on a leash, loves people and all dogs, and will even play now with younger friends in rescue. He has won the hearts of everyone he has met and will be a beauty when his coat grows out. We know Prince is forgiving and thankful for the life he now has, but he needs a forever home where he can live out his golden years after all the undeserved neglect for a long, long time. We love the seniors, but most adopters want a younger dog, so he needs a home with someone who holds seniors in a very special place in their heart and will love him for the remaining years he has. All of us in rescue have had at least one prince, and many have adopted at least one, too. They can all say it was one of the most rewarding experiences they have ever had. Seniors ask for so little but are grateful for everything they get. They want nothing more than a soft bed, good meals, love, care, and kindness, and they will appreciate and be grateful for just that and cause you no trouble – a life of safety for all the love and loyalty they gave in their younger years.