We would like to memorialize Stephen Smith, one of HCSR’s foster dads, who passed away recently. Stephen was a dedicated volunteer who liked to take on the “forever fosters” that could not be adopted out for various reasons (mostly seniors). He gave them the love and care they needed until they crossed Rainbow Bridge. Every dog was special to Stephen! Stephen had a collection of over a hundred Diecast cars that he acquired over the years and asked that they be donated to HCSR. These cars are collector items that Stephen cherished. His wish was for them to be sold and the funds donated to HCSR. We have raised over a thousand dollars from these sales so far and still have more to go! Stephen had such a big heart and a
true love for animals. He will truly be missed. 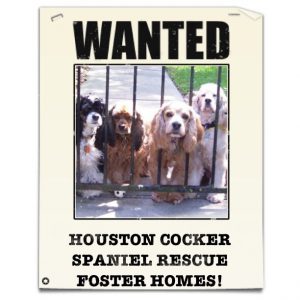 HCSR is in desperate need of foster homes….. especially in The Woodlands and Katy areas.  Even if you can only foster a dog short-term, that would help! Please notify us at cockerkids10@aol.com. We don’t want dogs to die just because we have no room, so please help us save a life ❤️